Congressman Ruben Gallego, a Democrat representing the 7th district of Arizona — including parts of Phoenix and Glendale — in the U.S. House of Representatives, shared his thoughts on current U.S. and international political issues during an hour-long talk at National Taiwan University (NTU) on May 2. From the then-ongoing Arizona teachers’ strike to the dynamics of U.S.-Taiwan-China relations, Rep. Gallego frankly commented on several controversial topics both in the U.S., Taiwan, and elsewhere. 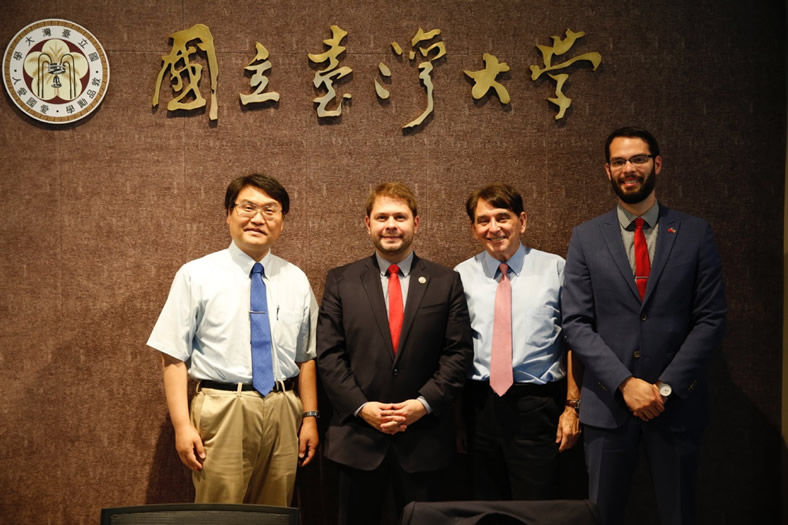 The American Dream and American Problems

A graduate of Harvard University with a degree in International Relations, Rep. Gallego was the first in his family to attend college.  Recalling his early life as a son raised by a first-generation immigrant, who was also a single mother, and the later success of all his family members, he described his family as a true example of fulfilling the American Dream. 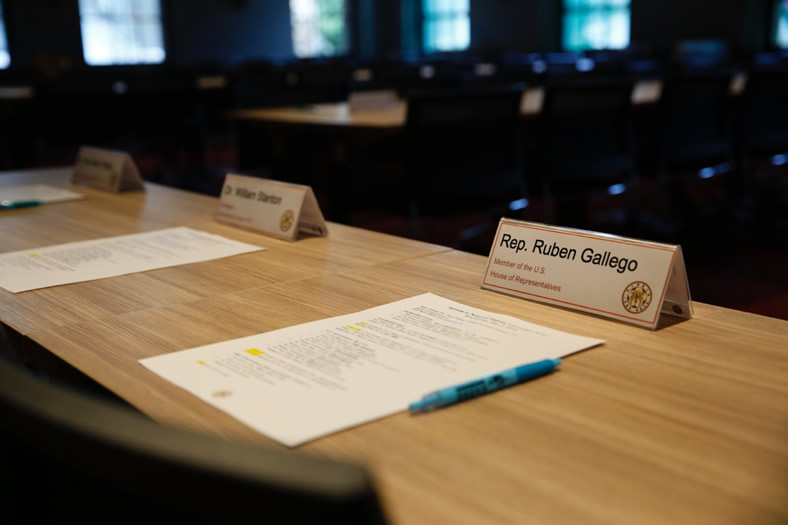 Out of the passion to repay his country for giving him the opportunities to work from the very bottom of society to the top, Rep. Gallego enlisted in the Marine Corps and was deployed to Iraq in 2005.   Time and the experience of war changed him.  It was not only the cruelty of war itself but also the unnecessary casualties caused by incorrect policies, as well as the inadequate post-war care for veterans that motivated Rep. Gallego to commit himself to becoming a “changemaker” through government service.

He said that the current problem in U.S. politics was that “we continue to invest in people and corporations who are not in need.”  The Congressman cited veterans as a key example of those in need, and in particular the need to reform veterans’ healthcare.

Different Approaches to Healthcare for Veterans and Education Needed

Rep. Gallego commented that experts in health care were not being appointed to handle Veteran Affairs. The U.S. Government’s current goal was only to take care of the veterans with the most serious health problems.   The Government, however, did not seem to realize that if only the very ill veterans were treated, others would become more ill, and eventually the system would actually cost more and ultimately collapse.  Even if you feel you are healthy now doesn’t mean you really are or will stay healthy.   He cited the example of those who returned from the Vietnam War.   Many of them found long after their return that they were suffering from the harmful effects of the herbicide and defoliant Agent Orange or from Post-Traumatic Stress Disorder, but they did not receive the critical support they needed. Moreover, Rep. Gallego observed, Washington neglected making use of the fact that the veterans’ hospital system comprised the “largest medical research institution in the nation, because of the huge number of patients it treats.”

The problem was not limited to healthcare, “Some of my fellow veterans became homeless,” he noted, because the United States was not making enough effort to help veterans resocialize. “We won’t in the future have an adequate supply of personnel for our military forces,” he concluded, “if we did not build a proper military and veterans’ welfare system.”

Rep. Gallego also shared his alternative views on education. “Many people believe that privatization brings efficiency,” he observed.  In fact, however, maintaining high-quality public schools was essential to ensure opportunities for all classes of people.  His own life was evidence of this.  Hence, answering a question from an exchange student from Arizona about the then-ongoing teachers’ strike in his state, Rep. Gallego said he supported the teachers’ demand for increasing investment in public education, especially given that Arizona was still a growing state. “Budgets in 2018 should not remain at the same level as in 2008 when our population has grown so significantly,” he said.

Sending Youth Off to War

Another continuing issue in U.S. politics, voiced by a U.S. student studying at NTU for his master’s degree, was whether it was necessary for the United States to send its young men to fight in other countries — such as Afghanistan and Iraq — that were at war.    Representative Gallego expressed no doubt that sometimes this might be necessary. 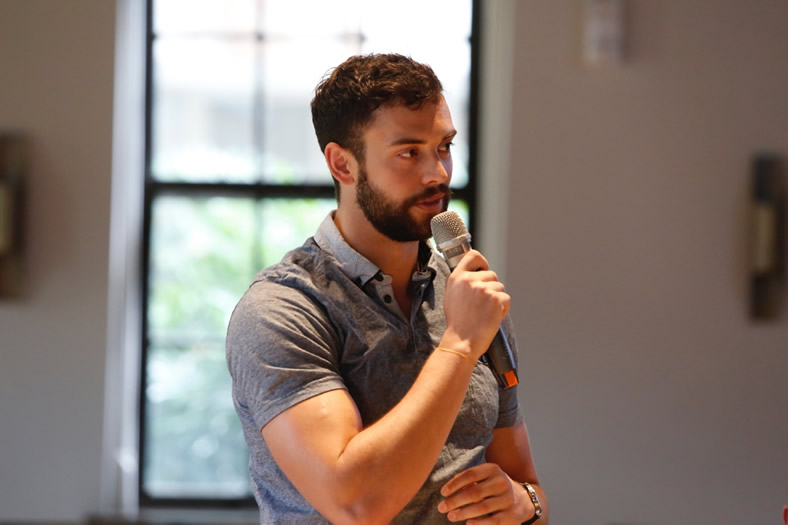 “The real problem is not whether you fight, but when do you fight?” Rep. Gallego said. “Back in 1939 [the outbreak of World War II], we first tried to stay away but it ended up allowing the problem to grow worse.   Sometimes, if we don’t take action, international stability will be threatened, and “we will then lose more men.” Rep. Gallego added, however, that “We also have to think carefully to where the action will lead us; will the situation unravel into a World War III?”  In addition, he pointed out that “The treaties the United States has also serve as a reminder to other countries that if they act, we will react.”

Asked about indications that North Korean leader Kim Jong-Un was pursuing talks with the U.S., Rep. Gallego commented it would be “definitely rational, from North Korea’s point of view,” yet for the rest of the globe “We are skeptical.”   Rep. Gallego said he did not think the United States or most of the international community believed that North Korea had now completed its nuclear arsenal.  “We don’t believe Kim has the capability he wants, and that he will have the capability to make progress in the next 5~7 years, but he won’t give up either,” he said.  Contrary to media speculation that progress is possible, Rep. Gallego said that this optimistic view is the very reason why Kim Jong-Un now seems to be confident to negotiate.

Representative Gallego said he did not see Kim Jong-Un’s meeting with leaders of China, South Korea or the U.S. as a victory, “unless the denuclearization of Korean Peninsula is realized.” As for reunification of the Korean Peninsula, he did not expect it for the foreseeable future.  “Consider, for example,” he suggested “how stressed the South Korean economy would be in the event of unification, as was the case when East and West Germany were reunited.” 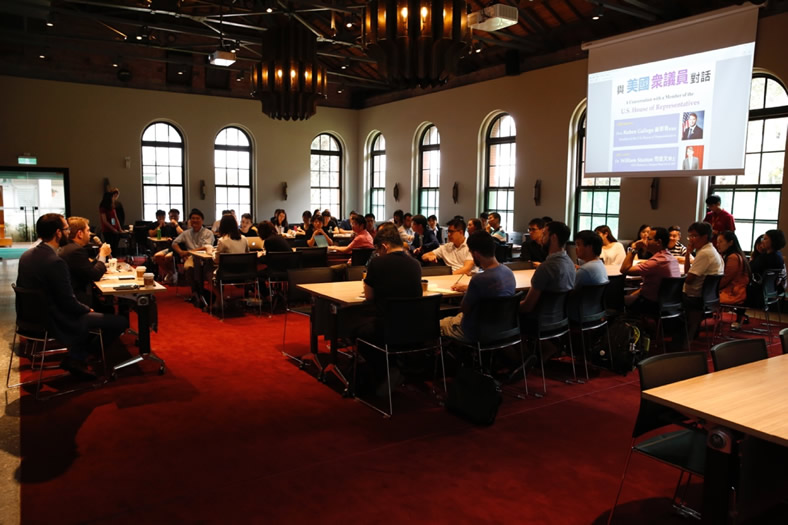 Besides the Korean Peninsula, NTU students expressed significant concern about Taiwan-China relations, and the potential threat to security in East Asia if cross-Strait relations deteriorated further. An NTU alumnus noted several recent U.S. policies that appeared favorable to Taiwan. Representative Gallego nonetheless expressed the view that “Despite possible increases in U.S. military sales to Taiwan, the passage of the Taiwan Travel Act, or more similar U.S. measures, those ‘pro-Taiwan actions’ should perhaps be seen as ‘leverage to gain more from China’, and just happened to be beneficial for Taiwan at the moment.”  In addition, he was not optimistic about the possibility of future independence for Taiwan. “Compared to reunification of North and South Korea, it will be more difficult,” he commented.   Nonetheless, Rep. Gallego continued, “The United States will remain consistent in its policy toward Taiwan. Any unification of Taiwan and China would have to  be based on the decision of the Taiwanese people.”

Seeking elaboration of the Congressman’s views on Taiwan, the event’s host Dr. William Stanton, NTU Professor and former Director of the American Institute in Taiwan (AIT), asked Representative Gallego, based on his meetings with Taiwan’s leaders, what advice he would give to Taiwan’s younger generation on planning their future.  Dr. Stanton noted that given the overall unstable cross-Strait relationship, including Chinese military exercises around Taiwan and Chinese efforts to rob Taiwan of its talented youth, Taiwan’s younger people appeared more and more anxious. This pressure had “led some of our students to wonder if they should emigrate.”

Rep. Gallego responded that “The [Taiwanese] government is optimistic but also realistic.”  He said “The United States will no doubt take action, under its treaty obligations, if China tries to force any changes in East Asia.”  He positively added that he did not think “the Chinese wanted any wars with any countries while they’re still rising; they have the idea of a 100~200-year [sic] plan to rise.  Right now conflict is not sustainable, so when it actually comes to that time, the Chinese political situation won’t be the same as it is now.”

To secure the future for the Taiwanese people, Rep. Gallego continued, “Go to the straight fundamentals. True democracy always stands. It will not fall apart from outside.  Even if talented people leave for China, they will never feel Chinese.” He observed that “If people are trying to leave, it implies that the country is declining,” but he believed that a country will always stand with an innovative economy and a true democracy.  His advice for the best strategy therefore was to keep proving to the world that Taiwan represents “a true democracy,” best differentiating itself from China.  In contrast, he noted, “If China is going to influence a non-democratic country like Myanmar, it would be hard for the U.S. to interfere.”

The Fundamental Strategy: Be Open to Innovation

“But Taiwan also has to keep innovating its economy to make itself an indispensable partner for the world,” Rep. Gallego stressed. “And to make immigrants’ life here easier – make it easy to start business, receive an education, welfare and so on in Taiwan,” he added.  Rep. Gallego emphasized his core belief, based on U.S. principles that “attracting the most innovative, talented and aggressive people from all over the world is what made the U.S. successful,” and cited as an example “the top ten tech companies.”

Answering a student’s question about President Trump’s conservative immigration and visa policies, Rep. Gallego observed that “Shutting people out will break the pipeline of talents coming into the U.S. They will be deflected to other countries such as Canada, the U.K., and China.  If we kick the international talents out after their education in the United States, isn’t it a stupid investment we have made?”

Difficulties and Duties as a Representative

Commenting on President Trump’s many unconventional decisions and policies, Rep. Gallego described the President as someone who “doesn’t appreciate the past efforts of the United States to stabilize the world.”  Citing as an example Trump’s skepticism toward NATO, Rep. Gallego said the NATO alliance is “more needed than ever.”

While the President might be making the U.S. politics more difficult, Rep. Gallego said he considers it the job of Congressional representatives to “not let the generals simply lead the country to war without being challenged.  Let the authorities understand that politics, unlike winning this or that piece of property in business, is not a zero-sum game,” and that “We try to balance many different parties’ or countries’ interests.”

Nevertheless, the Congressman said he remained optimistic about the future of the United States.  For instance, “The Paris Agreement, we’re no longer in it, based on Trump’s political decision. But, in fact, we can still reach the Agreement’s environmental goals even if we do nothing.  Our energy usage, for example, is already at a more moderate level,” he explained. 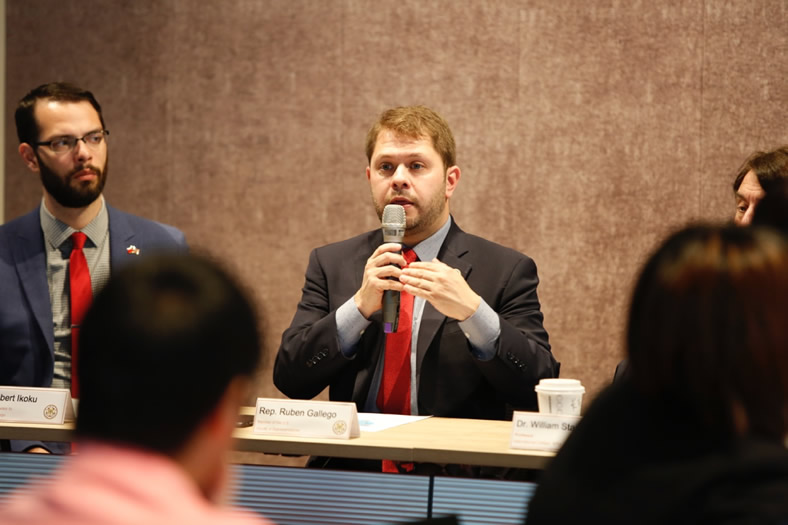 Rep. Gallego summarized his political views near the end of his talk.  Observing the differences between the Republican and Democratic parties, he noted that “Historically, Republicans — unlike President Trump — have believed in world trade and NATO, as have the Democrats.  Sometimes the parties have disagreed in some respects, such as whether or not to take military action.”  Nonetheless, “Even though we try to beat each other all the time, we then try to figure out how to work with each other.” “This is democracy,” he concluded. 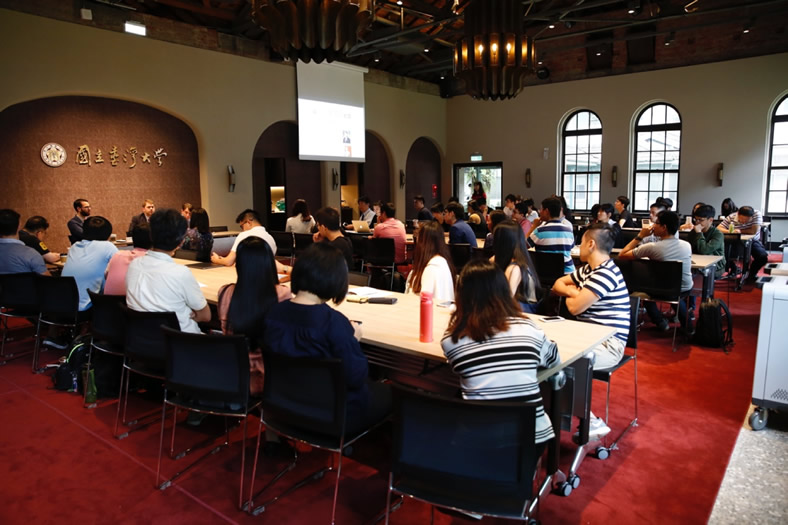 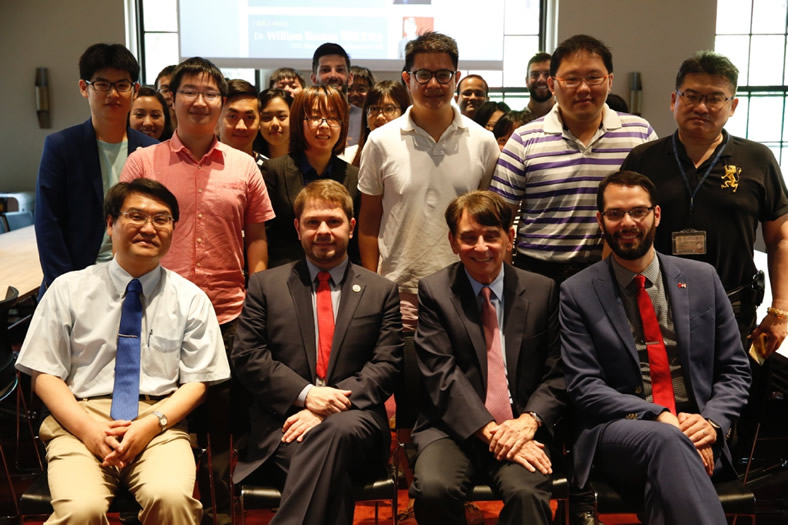