Breaking Cultural Barriers:
One Trip at a Time 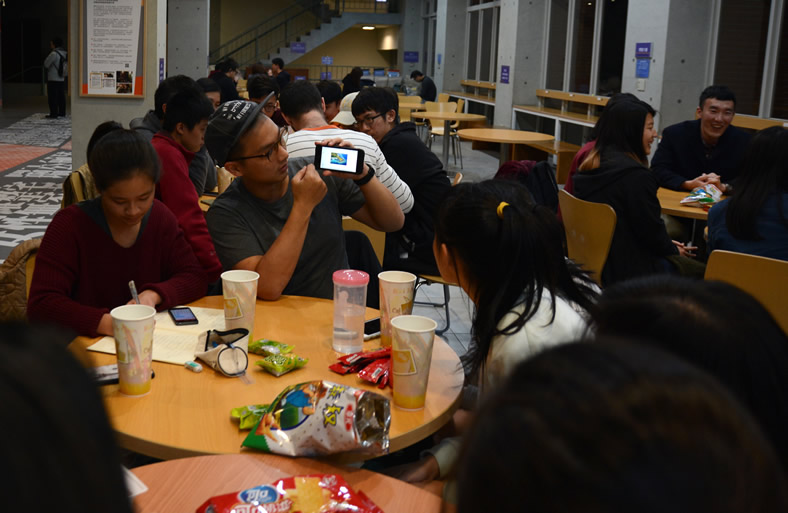 The National Taiwan University (NTU) International College Provisional Office and the university’s Student Association have worked to connect local and international students through creative storytelling with its event series, “Be a Storyteller: Your Journey is Our Journey (有故事的旅程計畫：個人行動圖書館).” They hosted the last event of the year, “The Disclosure of the Undiscovered Visiting Places,” on Dec. 21, with over 30 students attending.

“I like quiet places,” said the student from Vietnam, while swiping through the photos on her iPod. She showed photos of vast oceans, white beaches, and rows of palm trees. Students around her table were eager to ask more questions. “Is the island hard to get to?” one asked, “Where did you stay at night?” questioned another. What may seem to be an hostel-only conversation starter is happening on campus.

The National Taiwan University (NTU) International College Provisional Office and the university’s Student Association have worked to connect local and international students through creative storytelling with its event series, “Be a Storyteller: Your Journey is Our Journey (有故事的旅程計畫：個人行動圖書館).” They hosted the last event of the year, “The Disclosure of the Undiscovered Visiting Places,” at the NTU Liberal Arts Building’s first-floor-round-table-area on Dec. 21, with over 30 students in attending.

The event began with Steven Chen’s (陳冠儒), head of the student association’s External Affairs department, welcome remarks. “Overseas students will share their insight and thoughts about visiting places in their own countries that you may have never heard of. And our Taiwanese friends will share Taiwan’s must-see pocket lists too.” The event was scheduled with 30 minutes of story-telling by foreign students and followed by another 30 minutes by local ones.

STORIES FROM HOMES FAR AWAY

It takes a four-hour bus ride and another two hours of ferry trip from the mainland to reach the island. “So the Islanders are very enthusiastic to travelers, even the dogs are nice to us!” she laughed while pointing to her iPod pictures. She showed the group photos of seafood platters, local fish markets, fish boats and her family and friends on the trip.

At the same table, Melvyn Pard from Indonesia shared a slightly different story. Picking a common tourist spot, Bali Island, he wanted to point to the “less-touristy” places on the island. “A lot of people go to Bali for the beaches, but the beaches get boring,” he recommended visiting the paddy fields and mountains. “Bali also has unique food, it’s the only place to eat pork,” thanks to the Hindu population that dominates the area.

Following the roundtable discussions, the five international students went on stage, some prepared with PowerPoint presentations, others simply armed with their travel experiences.

“My favorite place is probably Berlin, but it’s very touristy,” Antonia Winkler from Germany said half-joking. As to suit the topic of the night, she recommended small towns in Germany. “They are usually calm and relaxing, go have coffee and admire the old buildings.”

Jongseok Yu from Korea had an entire PowerPoint presentation prepared for his audience. “I came to Taiwan in January this year, my Chinese is bad, but I still want to try,” he said and proceeded to complete his ten-minute presentation in well-rehearsed Chinese.

He deliberately chose places close to Seoul to share with his audience —— an amusement park from his childhood, Bukchon Hanok Village, Korea University, and Bukhansan National Park. 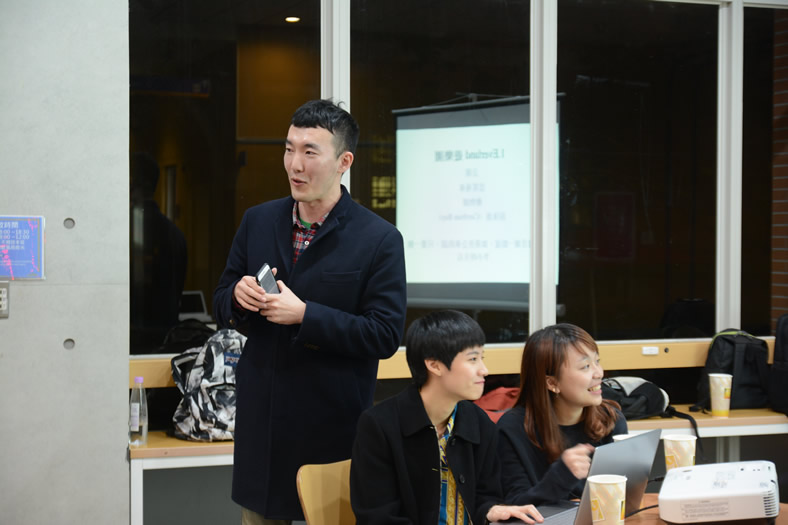 Clark Groepper from Canada also had a full presentation ready. He first showed a map of Canada and asked the audience to guess which part of the country he was from. It turned out to be Inuvik, a small-town 200 kilometers from the Arctic Circle, where only 50 percent of the population are non-aboriginals and the average winter day is minus 30 degree Celsius.

“You will experience real winter here,” he said jokingly, as the audience burst out with laugher. He then introduced popular winter activities back home. Cross-country skiing, bonfires, and music festivals, just to name a few. He also talked about the aboriginal cultural events such as traditional fishing and igloo making.

TAIWAN, OUR ISLAND, OUR HOME

Taiwanese students also had many stories to share when it was their turn to introduce Taiwan’s best places to visit. 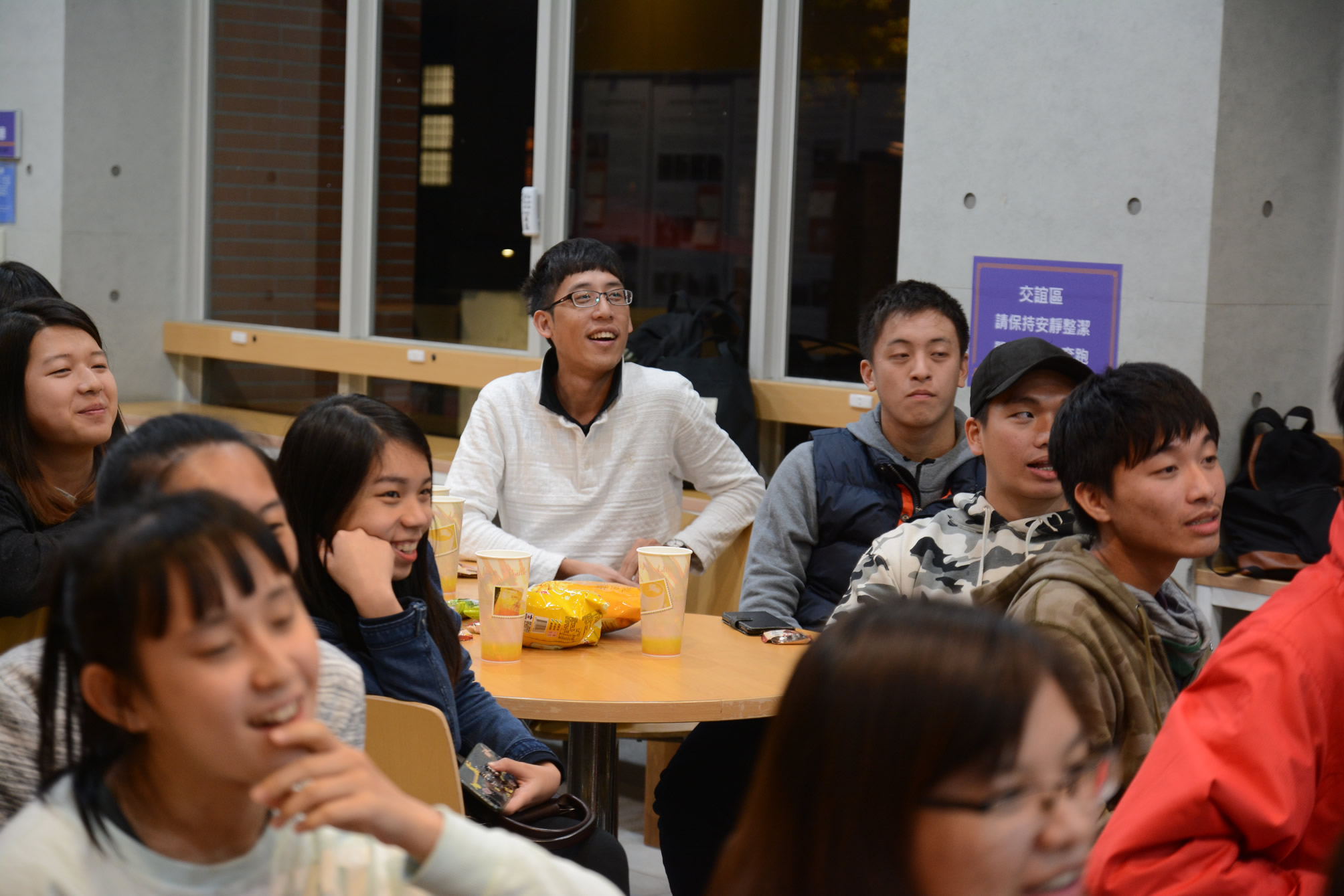 One student introduced Qingtiangang Grassland (擎天崗) close to Taipei, “it’s great for picnics in the afternoon and stargazing at night.” The place is also famous for its free-roaming water buffalo population. “Can you camp up there?” one international student asked, “if you’re not afraid of being run over by buffalos!” a local joked in response.

Another student at the table recommended visiting two islands within Penghu County (澎湖), Qimei Township (七美) and Wang’an Township (望安). “People don’t realize you can stay overnight there, but its less populated and very beautiful,” said the student. He explained that there are few restaurants to dine in at the two townships, which might explain why so few visits. “Not even 7-11s?” the Indonesian exchange student asked, winning him laughs around the table.

The student council also prepared an official presentation for their foreign friends. They introduced Treasure Hill (寶藏巖), which is only a bike ride away from NTU, and Kaohsiung’s metro station Formosa Boulevard (美麗島站), displaying pictures of its public art, Dome of Light. 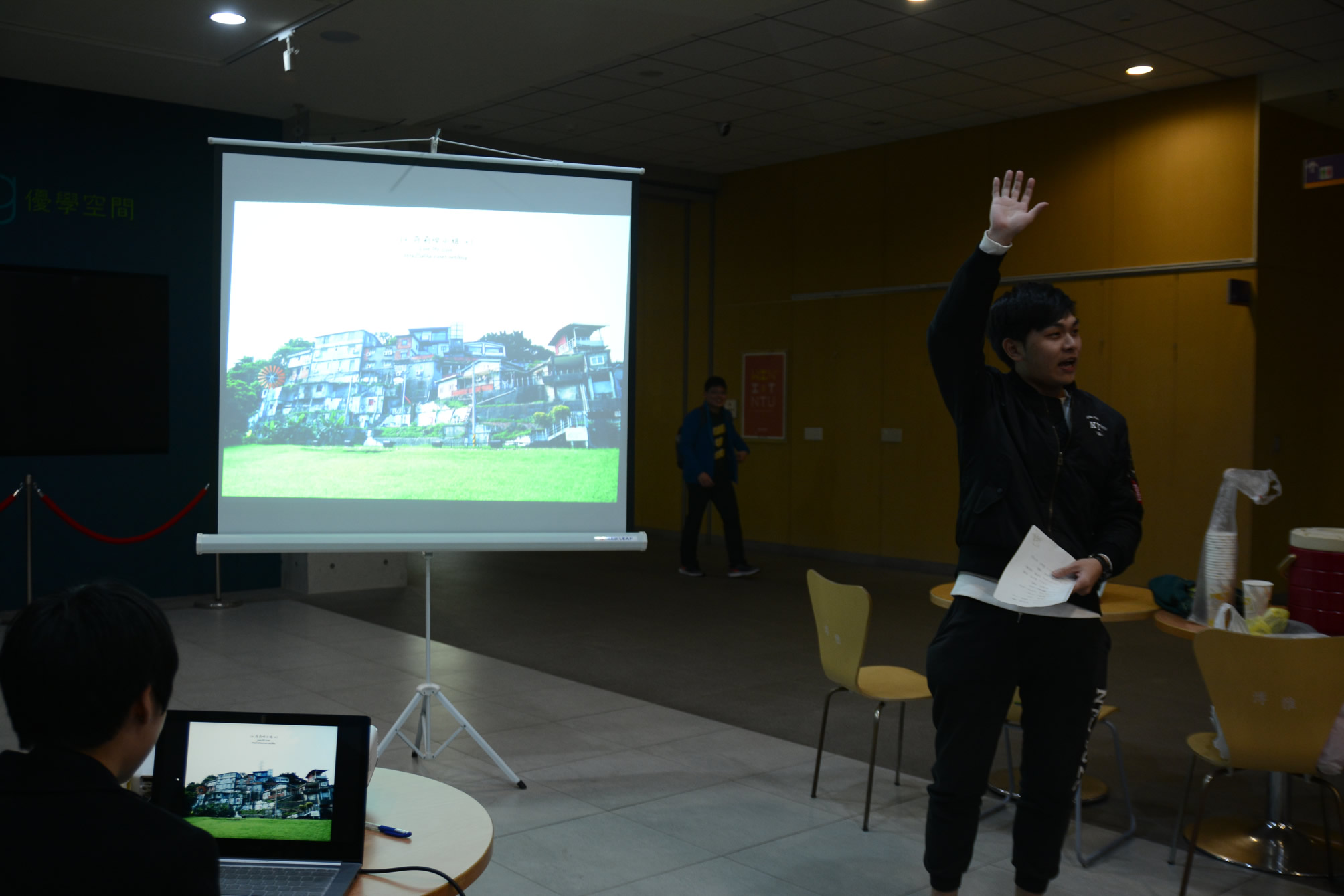 Before the event concluded, the exchange students had another opportunity to share what they have learned from the locals and where they wish to go next.

THE END IS THE BEGINNING

“I’ve noticed that people who show up at our events usually have something that they want to share with others,” because each event is theme-focused, it often attracts the right people, said Steven Chen’s (陳冠儒), head of the student association’s External Affairs department.

They’ve received positive feedback from exchange students, “probably because they also want to meet locals!” Taiwanese student are often surprised by the stories they hear, “it stimulates our imagination and that fulfills the goal of our event,” Chen said.

Next year, the Student Council plan to expand the scope of their reach and collaborate with organizations outside of school. “We want to create opportunities for unlikely people to cross-paths, that’s what this is all about,” said Chen.

It’s our pleasure to have you here!
We are glad to tell you that NTU students are currently studying and walking around campus safe and sound.
Also, the government has prevention procedures for students to follow after arriving in Taiwan.
Even though, NTU has prepared remote learning plans for students in response to the uncertain situation of COVID-19 pandemic.
Therefore, we cordially invite you to know more about our programs and welcome to join the NTU family! Please don’t hesitate to contact us if you have any questions.